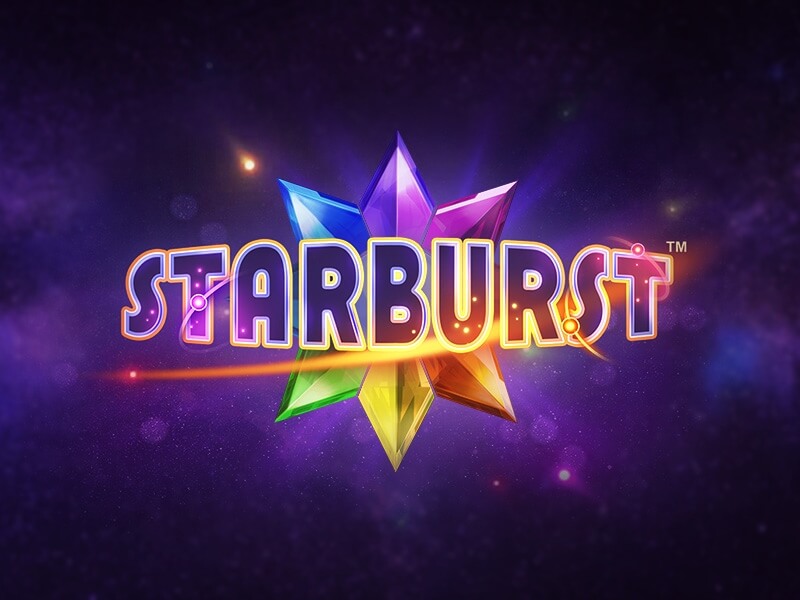 Starburst is a NetEnt slot game that’s become a stone-cold classic since it was released way back in 2012. This game transports players into outer space where you’ll be spinning lots of brightly coloured gemstones on your reels. This is a super simple slot game and while you won’t find a lot of big special features, there is an expanding wild symbol that can create lucrative wild reels.

If you’re looking for a low volatility slot game with simple and easy gameplay, then Starburst could be the title for you. Carry on reading if you want to learn more about this out-of-this-world slot game and the best online casinos to play it at.

This five-reel, three-row and 10-payline slot game is available to play from as little as $0.10 per spin up to a maximum of $100 per spin. To get a winning combo in this game, the payline must be formed on adjacent reels, but as it’s a win both ways slot, this can either be from the first or fifth reels.

Starburst has an RTP of 96.09% which is just above average compared to other slots. This is a low variance slot game, which means it’s designed to pay out frequently and has the potential to offer small payouts. The highest value symbol on your reels is the Bar and this will award 250x your stake when five land on the reels.

Watch out for the colourful star symbol, as this is the game’s wild and it can only appear on reels two, three and four. It will fill in for other symbols on your reels to help form new winning combinations and award cash prizes. It’s an expanding wild and so can create big wild reels. When a wild reel is formed, it’s frozen in place and players will get one free re-spin. If you manage to get all three of the centre reels turning into wild reels, you’ll receive the maximum three free re-spins. The feature only ends when a wild symbol doesn’t land on the reels during a re-spin.

Starburst is a mobile-friendly slot game that players can enjoy playing on the go from their mobile or tablet device. The graphics will adjust to fit on smaller screen sizes so you get the same high-quality experience as you would playing on a desktop PC.

How Does it Compare to Other NetEnt Titles?

Starburst was released a while back now, but it’s still one of the most popular games in the NetEnt library. It’s so popular, in fact, that free spins welcome bonuses at online casinos are often provided with Starburst in mind. However, this is a very simple slot game and some players may be looking for titles with more bonus features.

Another hugely popular slot game from NetEnt is Gonzo’s Quest. This Aztec-themed title takes players on an adventure with Gonzo to find the lost city of El Dorado and all the hidden treasures that come along with it. Like Starburst, it’s an older game in NetEnt’s library but it has many more bonus features to enjoy, including a wild symbol, free falls feature and the sought-after avalanche feature that players love to see in slot games. Furthermore, there’s the opportunity for players to win up to a massive 37,500x their stake!

Dead or Alive 2 is another massively popular slot game from NetEnt that has a cool Wild West theme. This game has lots of great bonus features including sticky wilds and three big free spins bonus features. During the free spins features, you can look forward to more sticky wilds, increasing wild multipliers and more. Players can potentially win up to a whopping 40,500x their stake per free spin.

How Does it Compare to Other Slots on the Market?

As we previously mentioned, Starburst is one of the most popular slot games anywhere online, but it’s not for every player. Some may find this game too simple when compared to other slots that have complex mechanics and features.

Another older slot game on the market is Microgaming’s Thunderstruck II. This game has a cool Norse mythology theme and plays on five reels with a ‘243 ways to win’ payline structure. This game takes players into another world too, but this time there are lots of bonus features including wild reels and a huge free spins bonus round where there are four modes named after each of the gods. These provide different features such as rolling reels, increasing multipliers and random wilds. There is the chance to win up to 8,000x your stake spinning its reels, and it’s arguably a more engrossing game than Starburst.

A slot with similar gameplay to Thunderstruck II is Immortal Romance. This is a Microgaming slot with five reels and 243 ways to win. It too has a wide range of bonus features including a free spins bonus round with different modes named after each of the characters on the reels. Extra features as you spin include multipliers, extra wilds and rolling reels. In this game, players have the chance to win up to 12,150x their stake, which is much higher than the 250x max win in Starburst.

Starburst is a nice game and many players enjoy its simplicity, but if you’re looking for something a little more exciting then Immortal Romance and Thunderstruck II are great options.

Starburst is a simply designed online slot game that will draw players in with its colourful theme. Players will find themselves transported to outer space where a beautiful galaxy swirls in the background of the transparent reels. On the reels themselves, almost all of the symbols are brightly coloured gemstones including an orange hexagon gemstone, a square blue gemstone, a purple diamond gemstone and a yellow triangle gemstone. Some classic slot symbols are also emblazoned on the reels, such as Bars and 7s. There is a nice soundtrack as you spin the reels which becomes much more active when a winning combo hits.

Similar Games to Try Out

Cosmic Crystals – This Iron Dog Studios slot game features five reels and 50 paylines and transports players into outer space where lots of colourful crystals preside on the reels. This game is very similar to Starburst and doesn’t have a lot of bonus features. Players will enjoy the re-spin feature and the wild symbol which can expand on your reels to provide more winning combos. In this game, players can potentially win up to 1,000x their stake.

Crystal Sun – Crystal Sun is another slot game that’s very similar to Starburst. This is a Play’n Go slot with five reels and 10 paylines. The game has colourful crystals floating in space but has many more bonus features compared to similar games. This includes wilds, wild reels, multipliers and re-spins. There is the opportunity to win up to 4,000x your stake playing this game.

Star Trek – Space fans can’t go wrong spinning IGT’s Star Trek, based on the 2009 Hollywood blockbuster. This five-reel, 30-payline slot game offers a range of bonus features named after the different characters in the series – Spock, Scotty, Uhura and Kirk. Each has a range of free spins with a multiplier attached to the wins, and there’s the chance to get up to 250 free spins.

Starburst has long been a hugely popular game in NetEnt’s library and despite its simplicity it’s still a sought after game. It’s great for beginners and free spins for Starburst can be found as part of many welcome offers at new online casinos. The graphics are nice and the expanding wilds certainly add some excitement to the game.

Play Starburst at One of These Top Casinos

Slotnite – If you want access to a huge range of exciting slot games, look no further than Slotnite. This exciting online casino provides over 1,200 fantastic games to play including slots, table, card and live casino games. There are even some exclusive live casino games available here. Plus, there’s 24/7 live chat support should you need it. Sign up today to grab the 100% welcome bonus up to $500 and 100 bonus spins.

Casino Tropez – Casino Tropez is a sleek and sophisticated online casino with a gold and black colour scheme. Players can access a range of thrilling games here, including slots and casino games, not to mention plenty of huge jackpot slots. You can expect an array of secure banking options at this site, along with weekly loyalty bonuses for new players. Sign up today to get the 100% welcome bonus up to $100 before taking advantage of the rest of the welcome package.

FruitKings – FruitKings is a popular online casino that’s now available to Canadian players! This site features hundreds of thrilling casino games and a heap of big jackpot slots. It also has a unique, gamified loyalty scheme that lets you embark on a quest and collect virtual currency to spend on more bonuses. Newbies can sign up to play today and get a 100% bonus up to $1,000 plus 100 bonus spins.

Other Games by NetEnt 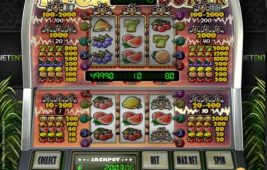 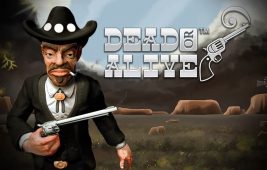