For your next foray into the online gambling world, consider Mascot Gaming. With great games, faultless design, and a determination to win the hearts of online casinos and their players, Mascot has all the makings of an outstanding game developer.

With a wide-ranging games library, and a dedicated team of technicians, designers, and gamers in its corner, Mascot is a developer worth paying attention to.

Check out our recommendations for the best Mascot Gaming casinos in Canada, compare welcome bonuses, and find your lucky mascot.

Mascot Gaming is a small development house providing games and operating platforms to the online casino community. It was founded in 2010 by two coders and is based in Madrid, Spain.

There are just under 40 games in the Mascot library so far, with an ambition to release 12 each year. These games are predominantly made up of video slots, but the studio also has a small collection of table games – including baccarat, poker, and blackjack – and instant win lottery-based titles.

Mascot Gaming is licensed by the Malta Gaming Authority, and its games can be played at some of the top Canadian casino sites, including Mr Bet, Casino Joy, and Casino Lab.

What are the Characteristics of Mascot’s Games?

It’s no easy feat establishing yourself as a developer of online casino games. In order to do so, software providers need to rely on a definitive set of characteristics – something that brandishes the brand name before the game has even begun. Here are some of the features that make Mascot’s games so compelling.

‘The Point is Math’

This is the slogan you’ll find on the Mascot homepage. Founded by two coding perfectionists, Mascot Gaming’s titles focus on being technologically exemplary. For Mascot, the foundation of any successful online casino game is the mechanics that make it tick – a studio could have all the designing expertise in the world, but if the game itself doesn’t operate smoothly, then players simply won’t come back. It’s this mantra that underpins every product that comes out of the Mascot studio, and players can be confident this developer has its calculations correct.

Video slots over the years have taken inspiration from a range of different cultural themes. Many software providers – particularly in their early years – tend to stick to only a few of these, but Mascot’s games encompass a wide-range of thematic concepts. Although there’s a nascent 30 or so slots in its arsenal, these games transport players from ancient Greece to ancient Egypt, the lands of Persia to the legions of Rome, and from Sherwood Forest to a zombie apocalypse. Mascot Gaming is also clearly a fan of the iconic fruit classics, with five of these titles available to play.

While the point may be math, as this developer says, it knows it’s not the be all and end all. Following up on this provider’s coding expertise are creatives who provide the flourishing touches to its games, thoroughly bringing them to life. All of Mascot’s games are designed to be a pleasure to get stuck into, and when you combine these three elements, any casino game becomes a joy to play. 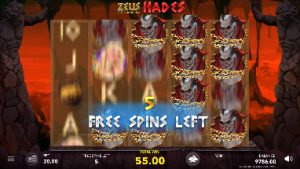 Staged up above the clouds in the Temple of Zeus, Zeus the Thunderer is a 5×4 reel with 20 paylines and a return to player (RTP) figure of 95.3%. Zeus is joined on the reel by Hades and Aphrodite, and together with the vase and the golden wreath, these five icons make up the highest paying symbols. As is standard, players will find winning combinations when they match three or more icons on the reel from left to right. Landing three, four, or five Zeus, Hades, or Aphrodite icons in a winning sequence on the reel will trigger the bonus round, rewarding players with seven, 15, or 25 free spins respectively. The corresponding symbol will then stick to the grid for the bonus round, and any spin that lands a scatter icon during this round will add one more free spin to the total. The game also generates options to purchase free spins and bonus rounds during gameplay. 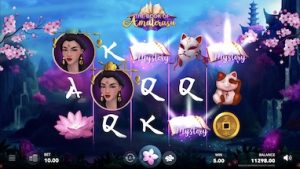 Set in the magnificent backdrop of mythical Japan, where pagodas, lotus flowers, and gushing rivers provide stunning visual aesthetics, Book of Amaterasu is a charming 5×3 reel with ten paylines and a slightly lower than average RTP of 95%. Players are looking for combinations from left to right, and the icons consist of Amaterasu herself, a stuffed cat, a cat mask, a lotus flower, and a golden coin, as well as the standard playing card symbols. There’s also a mystery icon – an ancient text – which will trigger the free spin bonus round when appearing three, four, or five times anywhere on the grid. The number of mystery icons you land will be reflected in the number of free spins issued, ranging from 10 to 15 to 20. At the beginning of the bonus round, one symbol on the grid will be randomly selected to become the round’s special expanding icon, and this will produce larger winnings when contributing to a successful combination. There’s a serene, spellbinding quality to this slot, with a masterful soundtrack pitched at the perfect tone, and a colour palette that will be sure to please those who appreciate high-quality casino game design. 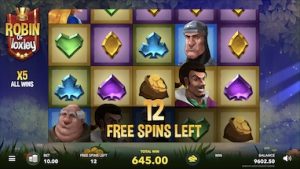 Join forces with the fabled Robin Hood and his band of Merry Men as you weave through the medieval English forest of Sherwood and fight against the tyranny of the Sheriff! Robin of Loxley takes place on a 5×3 reel, with an RTP of 96.1% and a total of 20 different paylines. The chirruping birds in the background keep things calm to begin with, but this slot has a betting range that stretches all the way to £40, and returns can be as high as 50x your stake. The icons to keep an eye out for are Robin Hood himself, the trusty Friar Tuck, the Sheriff’s henchman, and of course, Maid Marion, while traditional playing card symbols are replaced by the four card suits. The wild symbol here is a bag of gold coins, and landing three scatter icons (the arrow target) will trigger the bonus round. This is where it gets interesting: before the bonus round starts, you’ll have to select one of the scatter icons on the reel, each of which is concealing a number of free spins and a multiplier value. The quality of the bonus round will depend entirely on the choice you make, and any additional scatter icons will add one more bonus spin to the round.

The best Mascot Gaming casinos will follow up a hefty welcome bonus offer with a consistent string of quality bonuses. These bonuses will come in many different shapes and sizes, but here are some of the most frequently distributed.

Mascot Gaming casinos are likely to offer matched deposits throughout a player’s time at the site. Matched deposits involve the casino equalling a percentage of a player’s deposit up to a certain limit – for example, an offer of ‘100% up to $200’ would represent a generous offer, and would see players land $400 from a $200 deposit.

Since we’ve reviewed our three favourite slot titles from Mascot, it makes sense to tell you about free spin bonuses – a bundle of extra spins to use on the reels, usually in exchange for a minimum deposit into your casino account. For example, you might receive an offer of 50 free spins following a $25 deposit.

Mascot Gaming is a small development studio that packs a real punch. With flawless gameplay mechanics, interesting themes, and excellent design, all slots will please Canadian casino players of all kinds. But don’t take our word for it – sign up to a Mascot online casino and sample the latest from this impressive software developer.