The Highest and Lowest-Rated Games from Best-Selling Franchises

Video game franchises, old and new, have become cherished storylines within the gaming community. From Assassins Creed to Mario Kart, there is no shortage of long-running fan-favourites that have enticed gamers all over the world year-on-year. But which releases are the lowest-rated from popular franchises, and when did these dips come about?

By analyzing IMDb ratings of each game released within the top 10 biggest and best selling franchises, BestOnlineCasinos has determined at which point each game franchise received its highest and lowest ratings since launching. 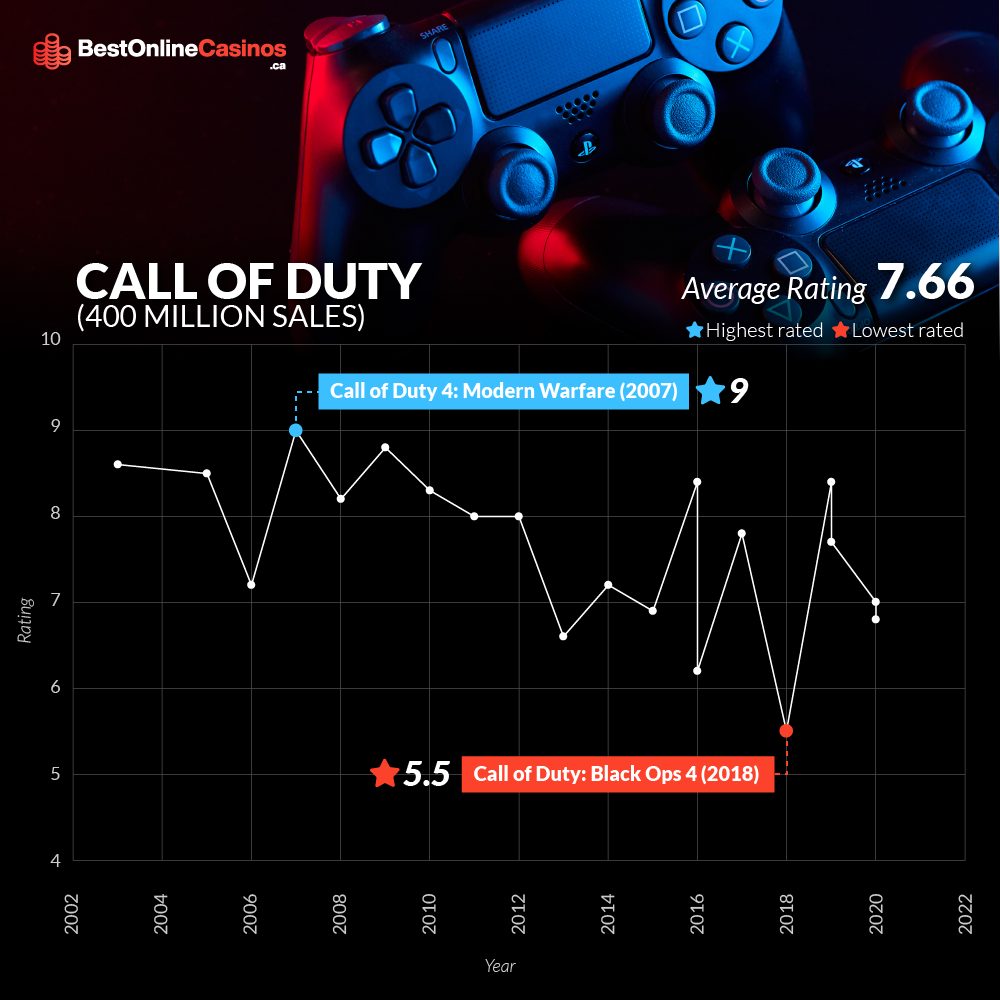 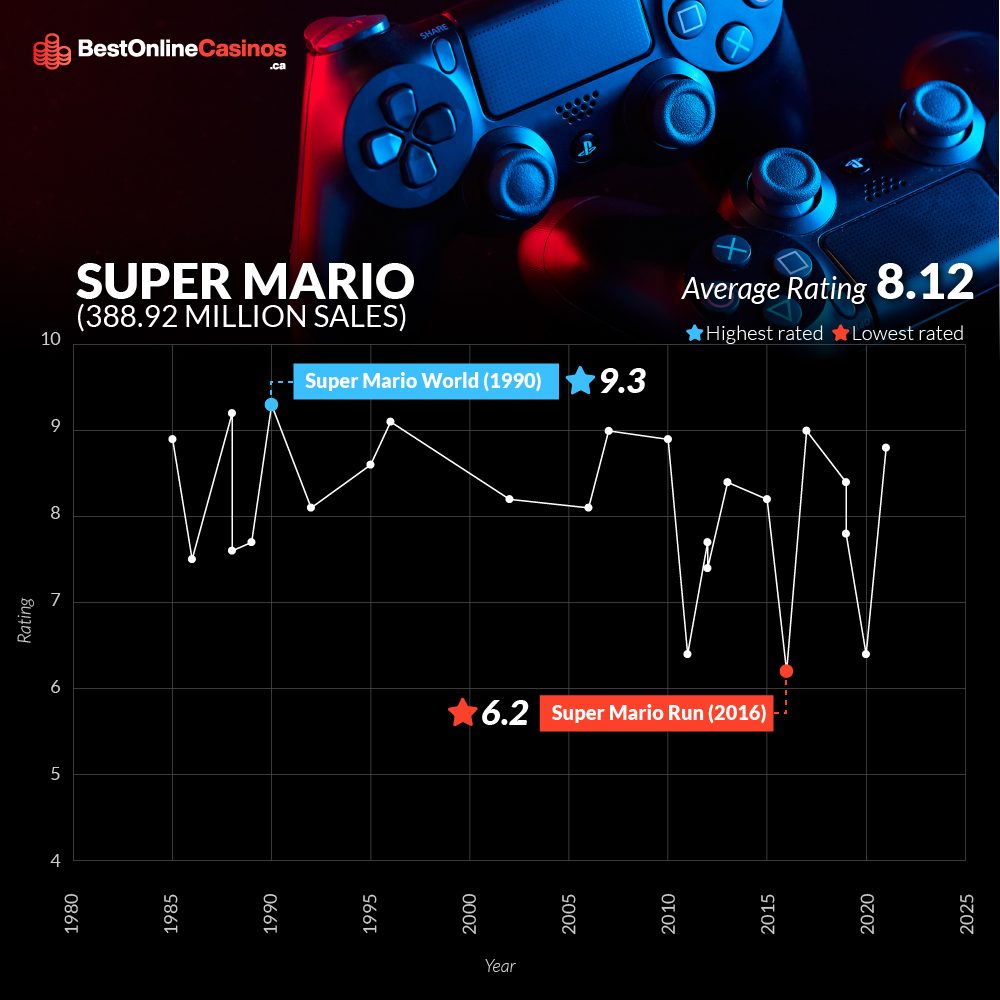 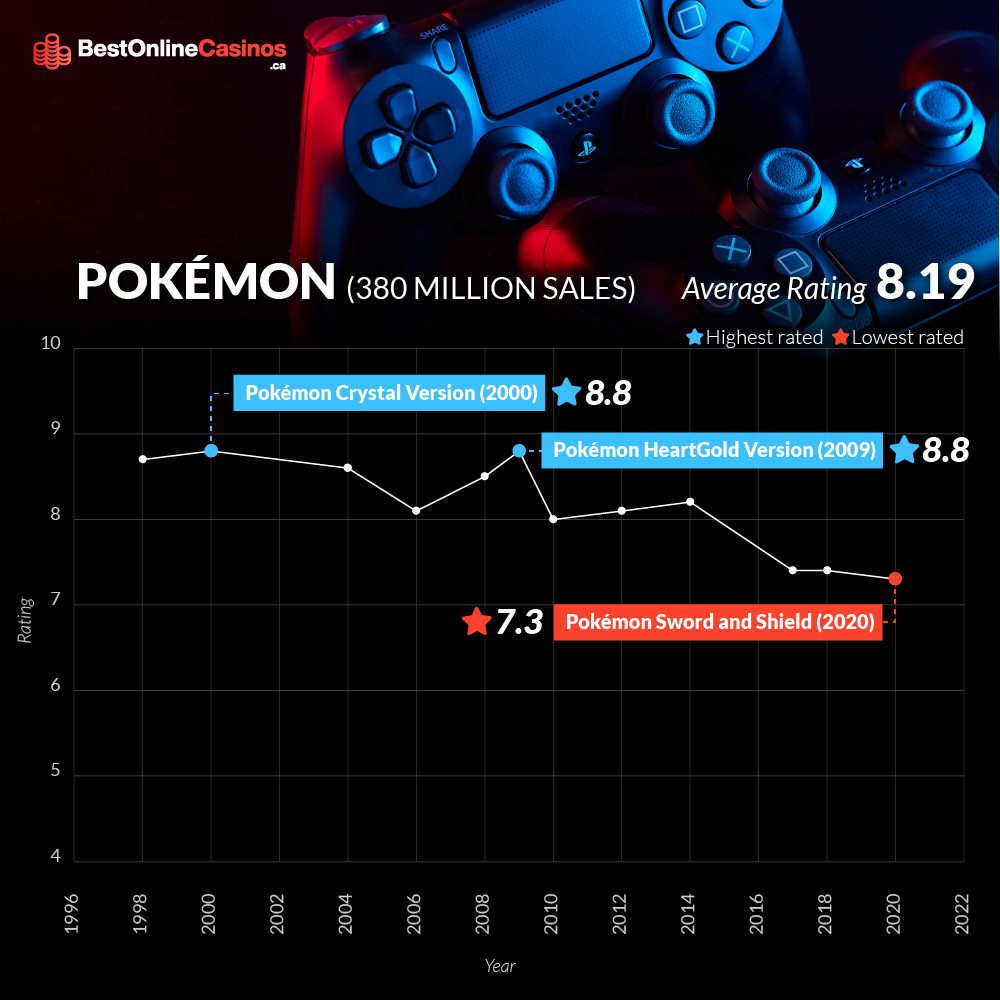 Pokémon is a franchise loved by people of all ages. The video game is part of the highest-grossing media franchise in the world, joining the trading card game, toys, various mobile apps including Pokémon GO, and the anime television show and movies. It has been an international hit since 1998, but it had the highest user reviews in 2000 and 2009 with ratings of 8.8 out of 10. Last year’s release of Pokémon Sword and Shield (2020) had the lowest rating of all, achieving just 7.3 out of 10. 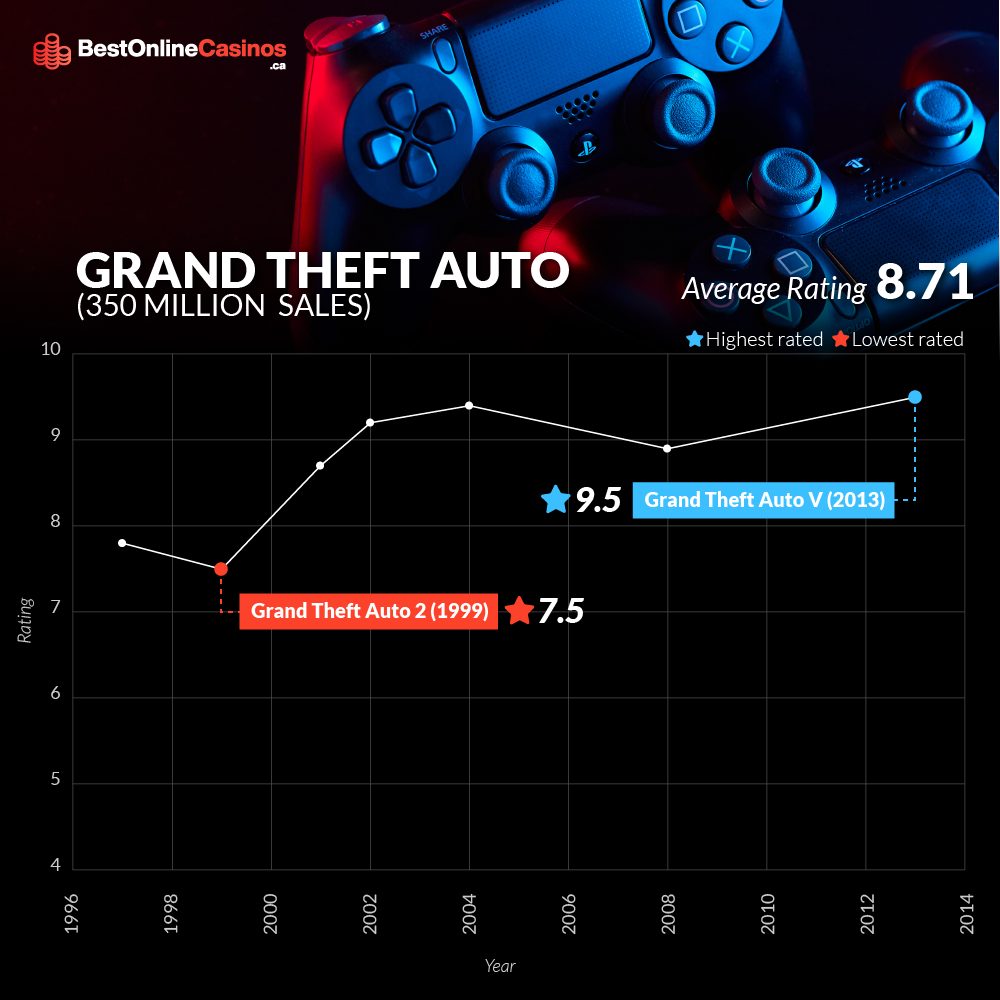 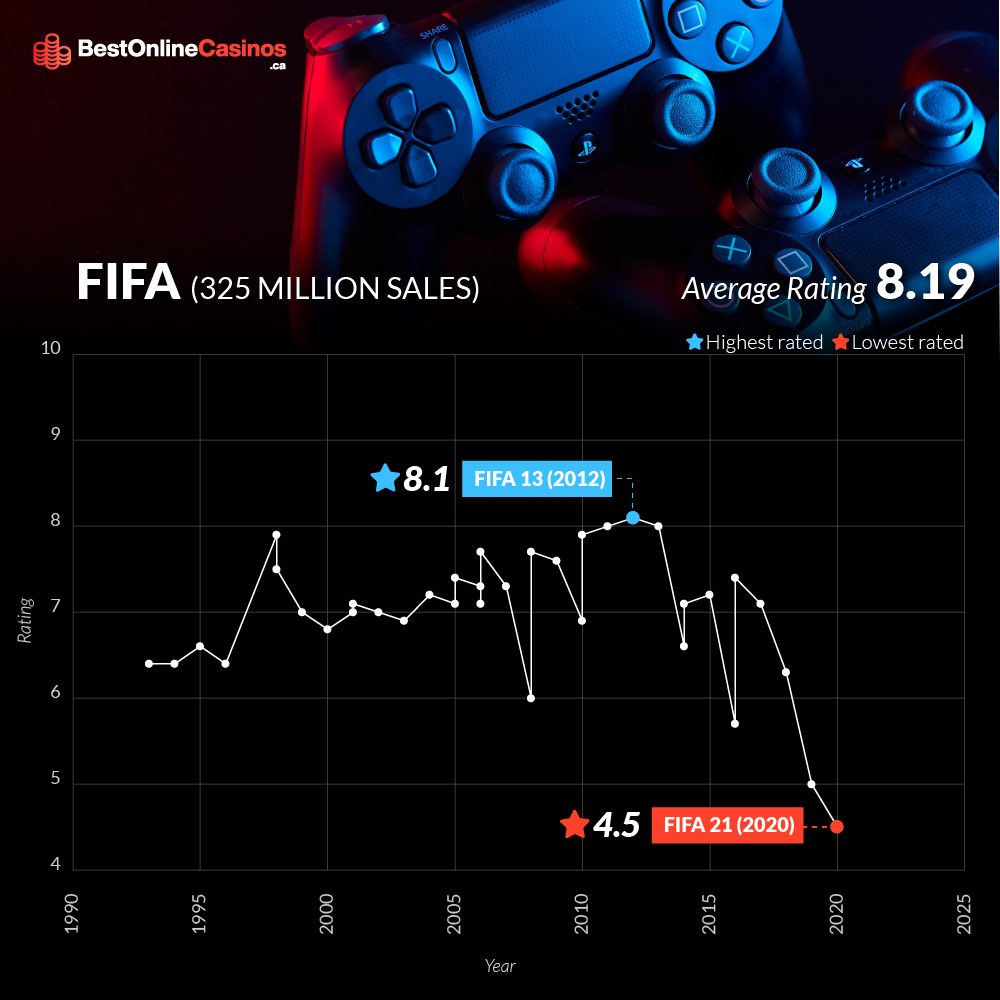 FIFA, a series of association football video games developed and released annually by EA Sports, allows players to enter online tournaments against their friends from the comfort of their own homes. Out of the 36 games released in this franchise so far, FIFA 13 (2012) achieved the highest rating (8.1 out of 10). Despite FIFA 21 having the best-selling status, it has the lowest rating overall – not only out of the franchise, but also out of any game released by the top 10 franchises in this list with just 4.5 out of 10.

As the franchise with the most games out of the top 10 franchises, LEGO games have had highs and lows over the years. Lego Star Wars: The Complete Saga (2007) achieved the highest rating of 8.6 out of 10 out of the 47 individual games released so far. However, The Lego Movie 2 Videogame (2019) received a pretty low rating of 5.7 out of 10. 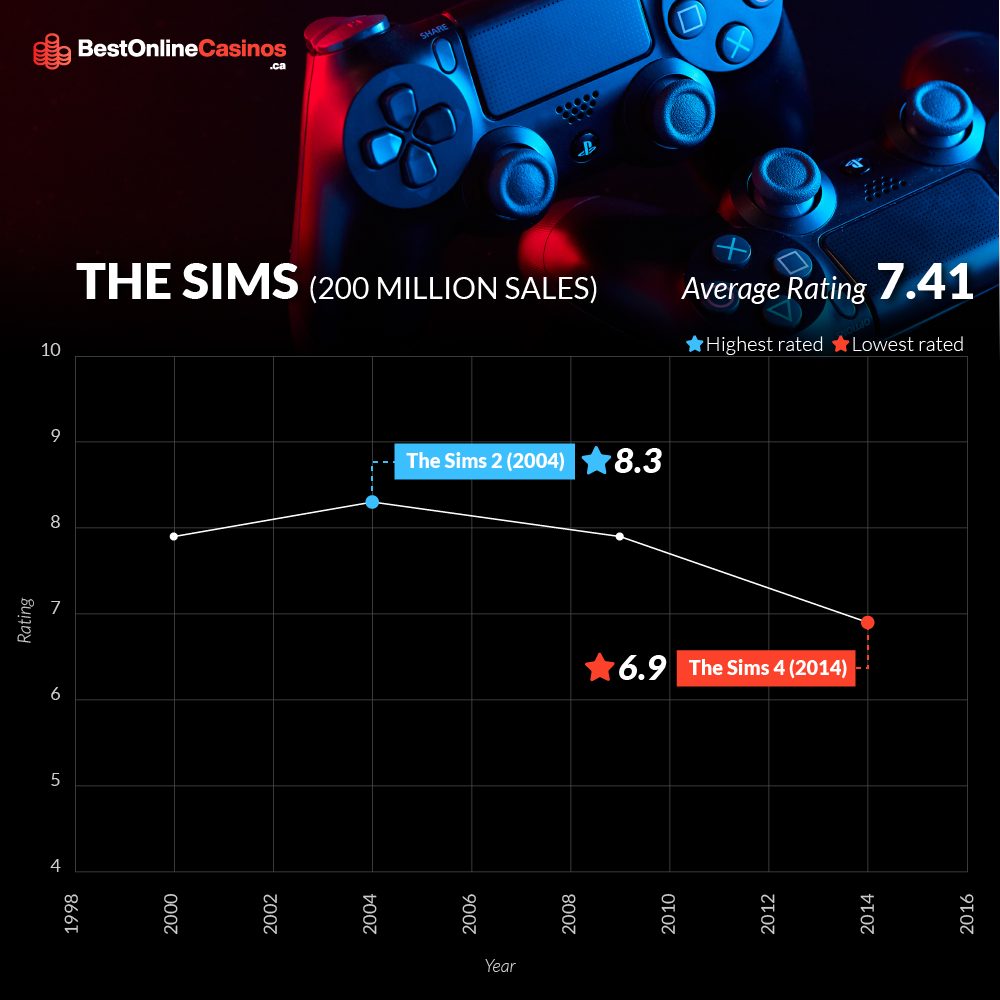 Despite only four mainline games having being released so far, The Sims is popular all over the world. The latest game, The Sims 4, has amassed more than 20 million unique players. However, The Sims 4 has the lowest rating of 6.9 out of the franchise compared to The Sims (2000) and The Sims 3 (2009), which received reviews of 7.9 out of 10. 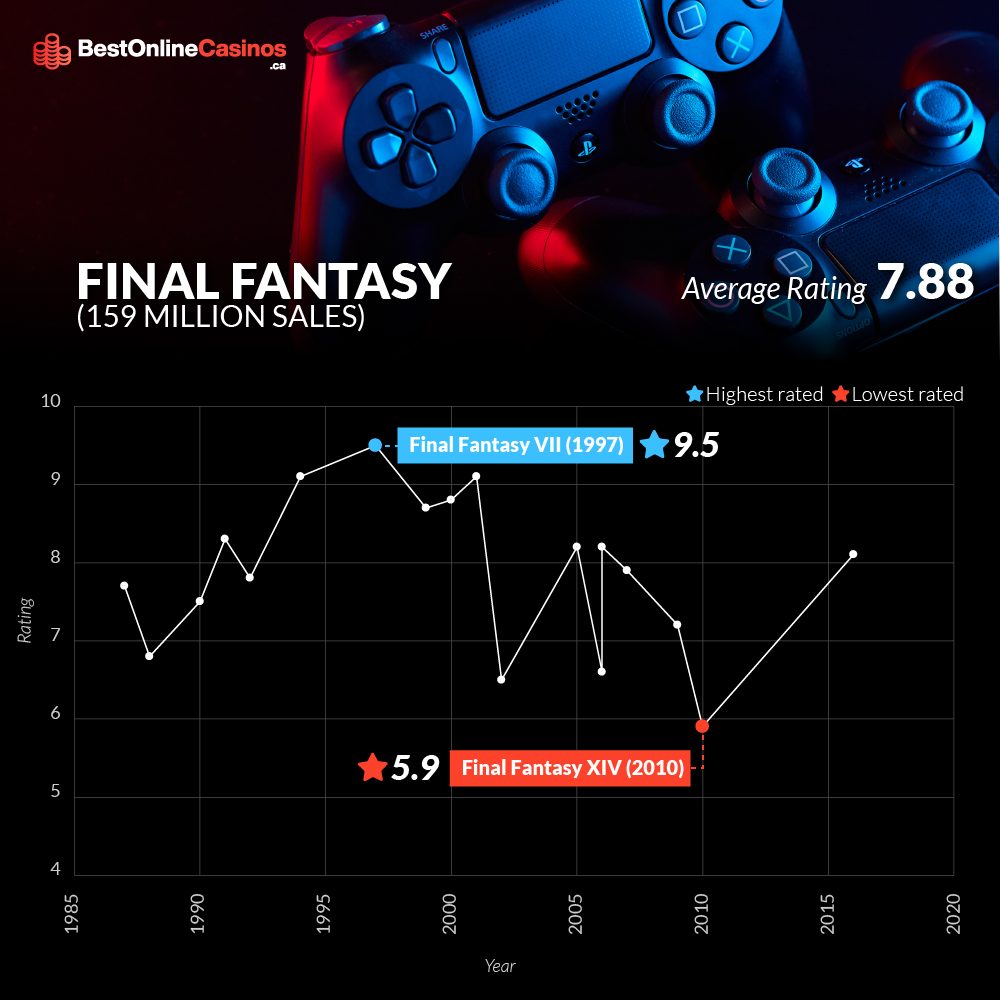 Final Fantasy is the second-oldest game franchise in the top 10 after Super Mario, and it’s been around since 1987. Since then, there have been 18 releases in this anthology – all with fluctuating ratings from gamers worldwide. The lowest rating was given to the 2010 release of Final Fantasy XIV (5.9), although the game subsequently underwent a major overhaul and is now considered a major hit in the MMO space long-dominated by World of Warcraft. Arguably the most iconic release in the series, 1997’s Final Fantasy VII, scored 9.5 out of 10. 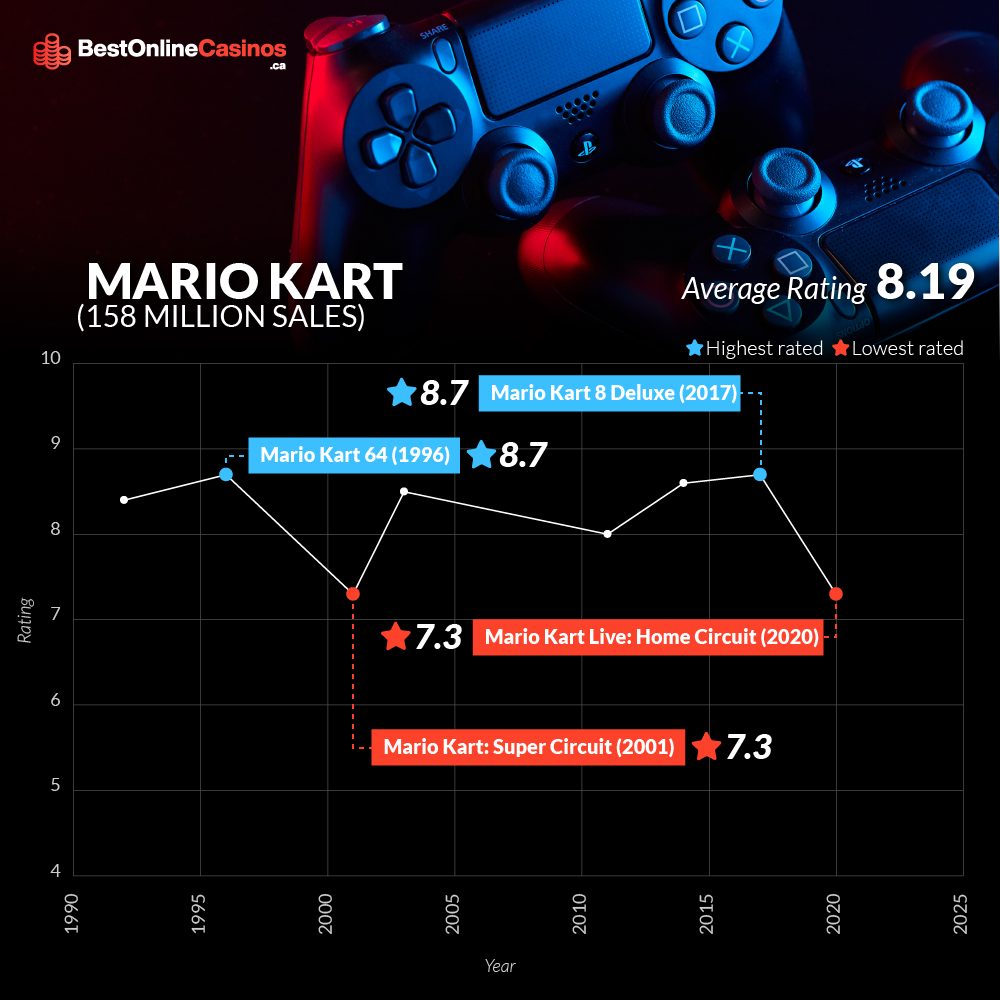 As a spin-off from Super Mario, Mario Kart was released with high expectations. In 1992, Super Mario Kart launched on the SNES to favourable user reviews and an eventual user rating of 8.4 out of 10 on IMDb. Its seven subsequent releases have remained highly-rated, with the lowest rating of 7.3 given to the 2001 Mario Kart: Super Circuit and 2020 Mario Kart Live: Home Circuit games. 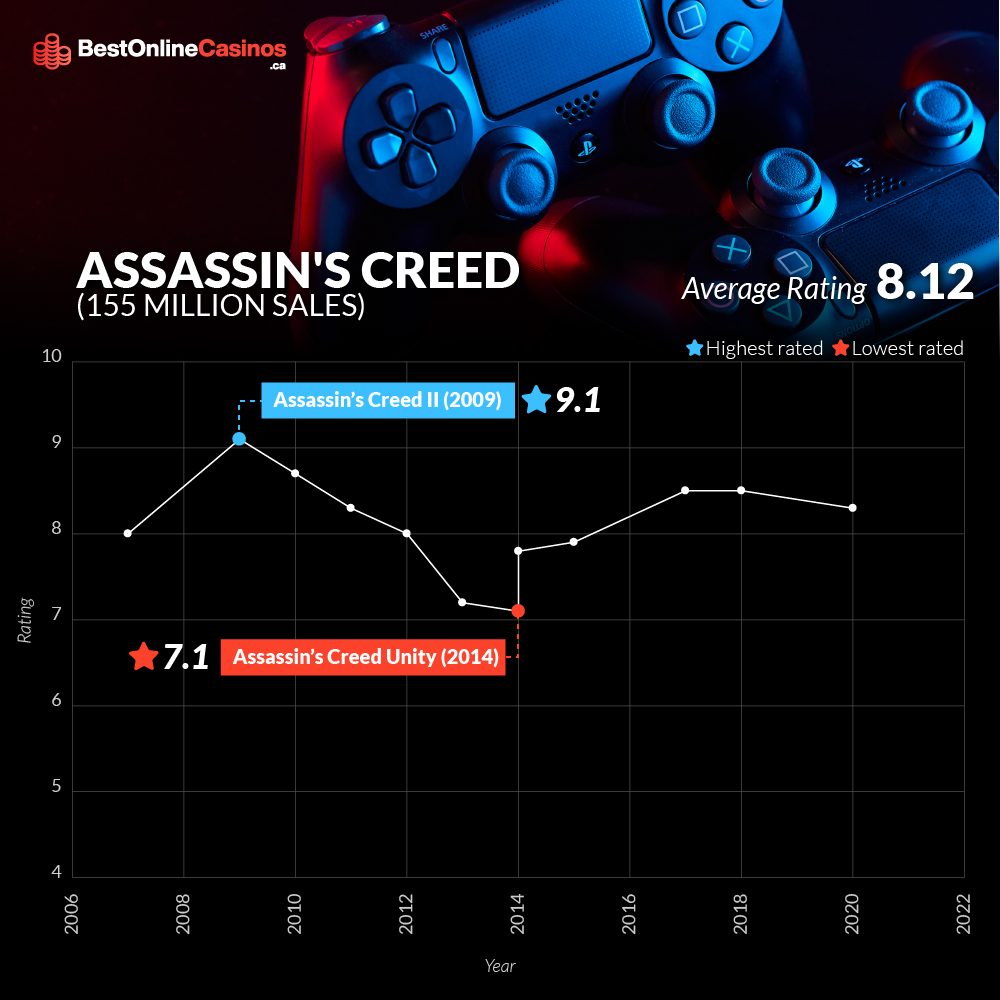 Assassin’s Creed, the newest game franchise in this list, has 12 games in its collection so far. While most releases have a rating of 8 out of 10, the second game, released in 2009 scored an impressive 9.1 out of 10. However, these high ratings dipped with Assassin’s Creed Unity (2014) which has the lowest score of 7.1 out of 10.