The self-proclaimed slotheads at Jade Rabbit Studios have a mission: to lay down an industry marker by bringing fun and passion back into slot game design. This ambitious young development studio has high hopes for itself, and we believe it’s got the potential to make a big splash in the industry.

With a talented team behind it, and recognition from some elite-level providers, Jade Rabbit is a name to remember.

Read our expert guides of the top Jade Rabbit casinos and their games, compare welcome bonuses, and take a punt on a new casino today.

Jade Rabbit is a young and ambitious casino software provider looking to compete with the best developers in the industry. Based in Malta, Jade Rabbit was founded in 2018 by Harry Biring, who brought with him experience from working at some of the biggest development houses in the world.

At the time of writing, Jade Rabbit’s games library consists of eight games, but the company has plans to release 12 games each year. Its games can be found at some of the most popular online casinos in Canada, including Mr Green, Video Slots, and Betsson.

Jade Rabbit Studios recently joined Yggdrasil’s flourishing Masters programme – a collaborative scheme that helps accelerate the game development and growth strategy of smaller software providers. Yggdrasil believes Jade Rabbit has a bright future in the industry, identifying similarities with its own development ideals, and the partnership will see Jade Rabbit gain access to Yggdrasil’s extensive operator network in order to ramp up distribution in the global market. This means you should get used to seeing Jade Rabbit’s games pop up at the best online casinos around!

The Hallmarks of a Jade Rabbit Game

Online casino game development is an incredibly competitive arena. In order to get off the ground at all, companies braving these waters need to have distinct design characteristics that allow them – and their games – to stand out from the crowd. Here are some of the things online gamblers can expect from a Jade Rabbit game.

The underpinning design philosophy at Jade Rabbit is that online casino games have lost their spark. There’s a suggestion from this developer that the industry has become bloated, and that casino games have sacrificed quality in the process. As a result, Jade Rabbit’s games look to harness the power of the ultimate purpose of any casino: gambling is a pastime to be enjoyed, and players need to have fun and be entertained as they play. It’s that simple, really.

It’s no coincidence that Jade Rabbit is collaborating with Yggdrasil, a developer famed for its commitment to bold colours and strong thematic concepts in its games. Yggdrasil has stated that it views Jade Rabbit as an appropriate partner based on its early signs of ambition in game design. The first Jade Rabbit game to be released via the Yggdrasil Masters programme was World of Thoth, which is an eye-catching introduction into what will surely become a sensational partnership.

Whether it’s through strong design elements, multiplier opportunities, bonus rounds, or strong characterisation, Jade Rabbit’s games seek to immerse players in the iGaming experience. It’s part of its mission to become a leading global design studio, drawing on the talents of the company’s small but experienced team.

Here’s our selection of the best Jade Rabbit casino games so far. 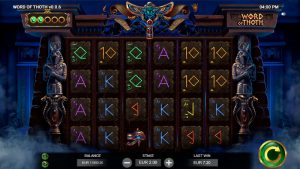 A product of the Yggdrasil programme, Word of Thoth takes place in a brooding Egyptian temple, where the ancient god of writing, magic, wisdom and the moon beckons players into the golden age of Khem. Any combination of three or more identical symbols appearing on the cascading 6×4 reel from left to right will reward players with a win, generating a return to player (RTP) rate of 96.12% and 4,096 different winning options. Players will notice a meter consisting of five bars in the top left corner of the game. Winning spins and scatter symbols will fill the meter, which resets after every spin. Players will trigger free spins if they’re able to fill all five bars of the meter, or if they land three scatter symbols anywhere on the reels. Once you head to the bonus round, the value of the meter will indicate the multipliers that are in play: if the meter is at three, the multiplier is x3, and so on. With a sultry soundtrack and first-class animations, Word of Thoth is a promising start to the Jade Rabbit and Yggdrasil partnership. 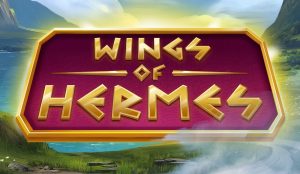 Whisking you off to join the gods of ancient Greece, Wings of Hermes is a 5×3 reel with an RTP of 95.36% and ten different paylines. Hermes himself joins you in mid-flight, and players can enjoy a magnificent backdrop that gives this slot a weightless quality. As well as the standard playing card symbols, the Wings of Hermes icons include a harp, a winged shoe, a helmet, and Hermes himself. To register a win, simply match three of these icons on the reels from left to right. The wild icon activates an automatic re-spin and moves to the left across the reels on each of these spins. Players that land seven scatter symbols (the bejewelled snakes) in one spin will trigger the bonus round, which takes place up above the clouds with a minimum of seven free spins. If players are able to refill the scatter pillar on the left-hand side of the grid, they’ll receive three more additional spins. 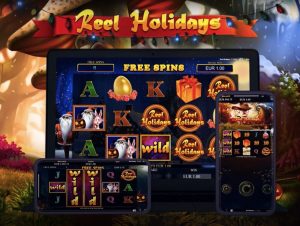 A five-reel slot with 20 paylines and 96.01% RTP, Reel Holidays takes inspiration from the zany animations of Tim Burton, with three different bonus rounds based on either Easter, Halloween or Christmas. Now, Tim Burton’s films aren’t for everyone, but we think Reel Holidays is an indication of Jade Rabbit’s outstanding design capabilities. High paying symbols include the Reel Holidays log and a golden Easter egg, and the calendar represents the scatter icon. Bunny wilds can appear in the base game and will generate at least one additional wild icon; pumpkin wilds, on the other hand, will generate at least one entire reel full of wilds. Players will trigger the free spin round when they land three scatter symbols anywhere on the grid, at which point one of three bonus rounds will appear at random.. A truly quirky, unique, and at times terrifying slot, Reel Holidays is one you won’t forget!

The best Jade Rabbit casinos will offer their players a generous welcome bonus when they first sign up, as well as a series of regular bonuses throughout their time at the site. Here are some of the most common.

If a Jack Rabbit casino offers a matched deposit, it means it will equal a percentage of your deposit up to a certain amount. For example, an offer of ‘100% up to $100’ would result in you having a $200 bankroll following a $100 deposit.

The majority of games at a Jack Rabbit online casino will be slots, meaning that players should keep an eye out for free spin bonuses. These are usually dependent on a minimum deposit, which will be rewarded with a bundle of free spins. For example, you might receive an offer of 20 free spins when you deposit $10.

Canadian online casinos typically saddle their bonuses with wagering requirements – a condition of a bonus that requires players to wager that bonus a specific number of times before they’re able to claim any associated winnings. This figure will vary with each casino, but is typically somewhere between 25-40x the value of the bonus.

We believe Jade Rabbit is one to watch, but don’t take our word for it – take a look at our recommendations for the best Jade Rabbit casinos around, compare welcome bonuses, and sign up to a site you like the look of today.